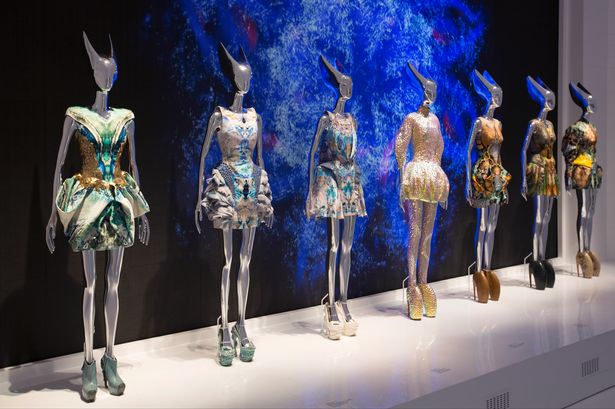 “London’s where I was brought up. It’s where my heart is and where I get my inspiration.” – Alexander McQueen, January 2000

Saturday morning, braving the effects of the previous night’s bottle of red, TASK’s Junior Account Manager Sarajane did the daily commute back into London for the Alexander McQueen Exhibition at the V&A. The tickets had been booked for over a year, and back then the 10am entrance time seemed like a good idea!

After battling through the tourists at South Kensington we made our way to the V&A, a building and museum worth a visit in its own right, we joined the end of a queue, tickets in hand. Once in the museum we made our way to yet another queue, which eventually lead through some ominous looking black doors into the exhibition.

Immediately you faced with a wall of holograms, depicting Lee Alexander McQueen’s face which as you move past turned into the famous image of a skull, followed by a moving epilogue about the exhibition and Alexander McQueen. Everything about the exhibition is slick, the music, the atmosphere and of course the clothes. You move through each collection, with each piece depicting which show it was from, the inspiration and who had leant the piece – many from private collections, and pieces from McQueen’s days at Givenchy.

Halfway through you enter into a huge square room, where there are at least 20 screens, each displaying a different catwalk show, including the spray painted dress from his SS99 collection. The dress is surrounded by other stand out pieces from his collections, including the Armadillo shoes, the butterfly head dress and a dress made entirely of feathers – it is like a treasure trove.

There are dresses made from the most bizarre items, including one made entirely from pheasant feathers and another from razor clam shells – which were found on a beach in Norfolk. There are crocodile heads on shoulders, jackets with gazelle horns and other innovative uses of fabrics and tartans from McQueen’s Scottish heritage.

As you move through there are quotes from McQueen, each detailing the inspiration for each season, how he drew inspiration from the past and his fascination with the natural world yet staying ahead of the times; his final SS10 collection before he died February 2010 was the first to be live streamed through Nick Knights SHOWstudio, this collection also featured 3D printed ‘Alien’ shoes and some of the first digitally printed dresses.

The curation is incredible, the dresses amazing and above all the attention to detail makes it one of the best fashion exhibitions I have ever been too, it seems a shame it’s only on for such a short period of time.

Tickets are still available, if you can go mid-week at 8am, but if you can get ticket it’s well worth a visit.